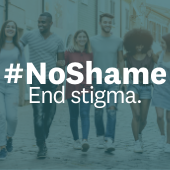 The ADA at 30: Disability and Substance Use Disorders – Know Your Rights

Happy 30th birthday Americans with Disabilities Act (ADA)! Signed into law July 26, 1990, the ADA ensures that people with disabilities have the same rights and opportunities as those without disabilities.

As a member of the “ADA Generation,” I have benefited from growing up with the ADA as law. While it’s still not without its challenges, using a manual wheelchair has generally not hindered my ability to live a “mainstreamed” life as an active member of my community.

Often, the ADA is thought of as a law for people with physical or visible disabilities, those who use wheelchairs or are blind and deaf, because they led the Independent Living/Disability Rights Movement (which stemmed from the Civil Rights Movement) from the 1960s-80s. I have to admit before I joined SAFE Project and dug deeper, this was my understanding of the law as well.

But did you know – the ADA can extend protections to people in recovery from alcohol, opioid, and substance use disorders (SUDs)? People in recovery may be unaware of their civil rights under the law, and this part of the legislation is underutilized.

In a nutshell, as pulled from the ADA National Network, the ADA consists of five titles:

Let’s take a closer look at how the ADA intersects with SUDs.

ADA and Substance Use Disorders

Addiction is a disease, and physicians recognize this fact. Without a doubt, sustained and prolonged use of drugs can harm the body and change the makeup of the brain, increasing the chance of repeated use. But do SUDs qualify as a disability?

Unfortunately, there isn’t a clear cut answer. Whether a particular person has a “disability” is decided on a case-by-case basis. The ADA has many intricacies, and no two individuals are the same. If you would like to learn more about how the ADA intersects with SUDs, visit The ADA, Addiction, and Recovery.

According to SAMHSA’s Know Your Rights brief, non-discrimination laws, which also include the Rehab Act of 1973, the Fair Housing Act (FHA), and the Workforce Invest Act (WIA), define “disability” as someone who has a current “physical or mental impairment” that “substantially limits” one or more “major life activities.” If a person has a record of a substantially limiting impairment or is regarded as having such an impairment, they may fall under this blanket definition.

It’s important to note that, as stated in the Department of Health and Human Services Fact Sheet on Drug Addiction and Federal Disability Rights Law, “Individuals who currently engage in the “illegal use of drugs” are specifically excluded from the definition of an individual with a disability when a covered entity takes an adverse action on the basis of that current use. However, an individual is not to be denied health services, or services provided in connection with drug rehabilitation, vocational rehabilitation programs and services, and other programs and other specific programs and services funded under the Rehabilitation Act on the basis of the current illegal use of drugs if the individual is otherwise entitled to such services.”

There’s Still A Lot of Work To Do 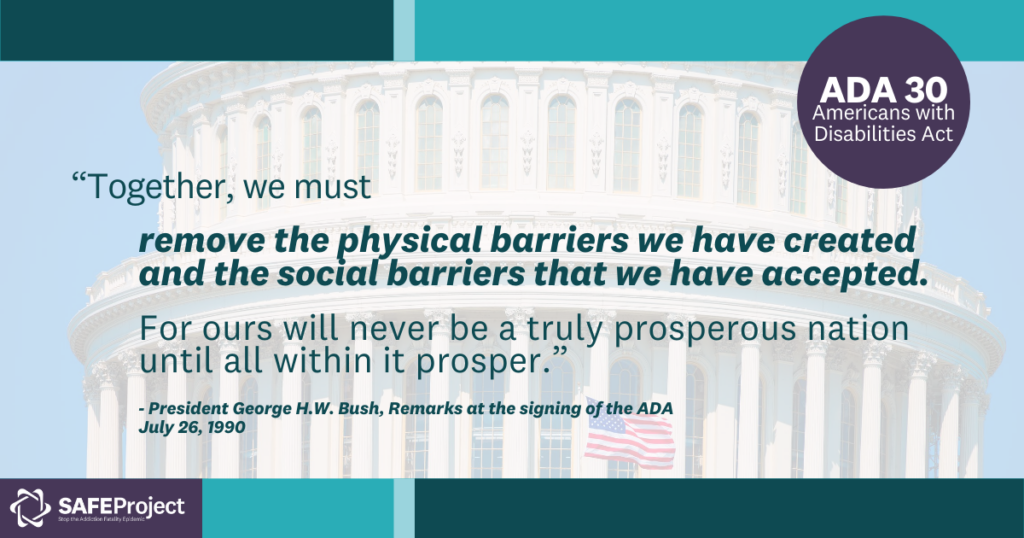 The Center for Disease Control and Prevention estimates that 61 million people in the US have some kind of disability, and the U.S. Department of Health and Human Services Office on Disability finds that 4.7 million adults have a SUD and a coexisting disability.

Thirty years after the signing of the ADA, discrimination, racial injustice, and the healthcare system are front and center. While I don’t have a substance use disorder, as a person with a disability, an Indian adoptee, and someone who manages anxiety, I’m aware of how high the risks are for developing one. There is still a lot of work to be done.

If we re-assess the last several months, the risk for COVID-19 was initially linked to traits such as age, sex, and underlying health conditions. Digging deeper, there’s evidence now that social factors such as race, location of testing sites, and access to quality healthcare are intertwined.

An article from StatNews examined a variety of COVID-19 studies that focused on race. The studies found that:

While I am not Black, I’m also not White. These facts and figures grab my attention. Change is needed.

In terms of the ADA’s well-known facets; the ability to access buildings, transportation, and to pursue education and integrated employment, progress has been made even though disparities remain.

However, persons with disabilities, including those whose SUD qualifies, continue to face discrimination, leading to large employment gaps (which affects income), a lack of and access to affordable and safe housing, and disparities in access to and quality of healthcare.

So, while the ADA has come a long way in 30 years, and I have greatly benefited from the doors it has opened for me, I’m curious and hopeful to see where the next 30 years takes us. There is always room for improvement and progress. It all starts with knowing your rights and advocating for them. In doing so, you might just open doors for others.

Want to learn more about the ADA? Visit the ADA.gov website.

About the author: Maggie Redden joined SAFE Project in March 2020 as a Communications Manager. She has over five years of experience in nonprofit communications, focusing heavily on disability-related issues as a paraplegic Polio survivor born in India. A 2008 Paralympian, she has a Bachelor’s in Communications from Penn State and a Masters in Public Administration from Saint Peter’s University.