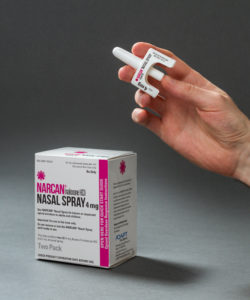 This month, two advisory committees of the Food and Drug Administration (FDA) met to discuss ways to expand access to naloxone, the life-saving medication used to reverse an opioid overdose. Communities that have been able to expand access to naloxone have been able to reduce opioid related fatalities, but cost, limited production, stigma, prescription barriers, and public awareness all impact how often it is used.

Naloxone does not produce any addictive or euphoric effects, is safe for use in everyone, and can easily be given to someone suspected of overdose. All states have changed their laws or regulations to allow more people to give naloxone. However, there is only one manufacturer of the brand name version most commonly used. Other versions (intramuscular injections) are costly or come with other regulatory barriers.

The committees invited manufacturers, researchers, community program leaders, and other experts before they made a recommendation to the FDA on how to expand access. The possible recommendations included offering more generic forms of naloxone to increase supply, providing it over the counter, or what they ultimately recommended; the FDA should include warnings with opioid prescriptions informing patients and doctors about naloxone. The FDA does not have to accept the recommendation, and will also consider hundreds of public comments on the topic before making a ruling.

S.A.F.E. Project submitted a comment for the FDA’s consideration based on data from our pilot Naloxone Awareness Project – a volunteer effort to raise awareness of the naloxone rules in Virginia. The state has a standing order to allow laypeople to carry and administer naloxone without a prescription from a doctor, which they can request at a pharmacy.

S.A.F.E. volunteers visited various pharmacies and found pharmacy staff who had naloxone training were very knowledgeable, and appeared ready to dispense naloxone upon request under the standing order. However, those pharmacies that had not received formal training were reluctant to provide naloxone to anyone without a prescription from their doctor.

Stigma did not appear to be a reason for denial, since none of the pharmacy staff asked questions about why the volunteer requested naloxone.

S.A.F.E. believes naloxone must be accessible and affordable for everyone. Rules around prescribing naloxone, however well intended, may still prevent those who need it most from getting it. Public comments to the FDA included many testimonials about those who need it being unlikely to ask for naloxone out of fear of judgment from a pharmacy staff member behind the counter.

Naloxone does not have dangerous side effects, will not adversely impact a person who is not having an overdose from opioids, and cannot be abused. Therefore, we see no productive reason for why it should be behind the counter.

S.A.F.E. agrees that the FDA should require better labeling of opioids, informing patients of the side effect of respiratory depression and its antidote. Opioids can slow, and even stop, a person’s breathing. This dangerous side effect is reversed temporarily only by naloxone. It goes without saying that someone taking opioids should know about this side effect, and what to do in case it happens.