The Science of Addiction

In 2017, 19.7 million Americans battled with a substance use disorder costing American society over $740 billion dollars annually in healthcare expenses, lost workplace productivity, and crime-related costs.¹ Addiction affects everyone in the person’s life; family, friends, and coworkers. To combat addiction, we must understand the science behind addiction.

Addiction is not just a bad habit, it is a change in the brain that overrides normal judgement and willpower. A person who is addicted will choose drugs or alcohol over their job, family, and even their basic survival instincts.

The Cycle of Addiction

To understand what is happening in the brain, we must break down addiction into a cycle of three stages that affect three specific areas of the brain. This helps us understand the compulsive and impulsive actions a person with a substance use disorder takes. The three stages are binge/intoxication, withdrawal/negative affect, preoccupation/anticipation.³

When a person uses drugs or alcohol, it activates an area of the brain called the basal ganglia, or the reward system. That reward system causes a rapid and steep release of dopamine, a neurotransmitter that produces positive effects. Dopamine’s  rapid release creates the high that users experience when taking the drug, changing the chemical balance of our brain affecting areas such as mood regulation, stress sensitivity, and proper decision making.

Chronic use of a substance leads to the reward system correcting the balance of reward chemicals released by reducing the amount of dopamine naturally produced in the brain. This reduction of naturally produced dopamine leads to the cornerstones of addiction, as those who have  used the substance will require a greater amount to feel high again and other activities feel less rewarding.⁵

Because there is less natural dopamine produced, drugs are then required for the addicted person to normally function. This activates the second stage of addiction — withdrawal/negative affect. Once that threshold of reward sensation has been moved when the drug can not be obtained,  withdrawals occur. Dopamine is more than just a “pleasure chemical” and causes many other chemicals in the brain’s levels to change.

Parts of the Brain affected by Dopamine 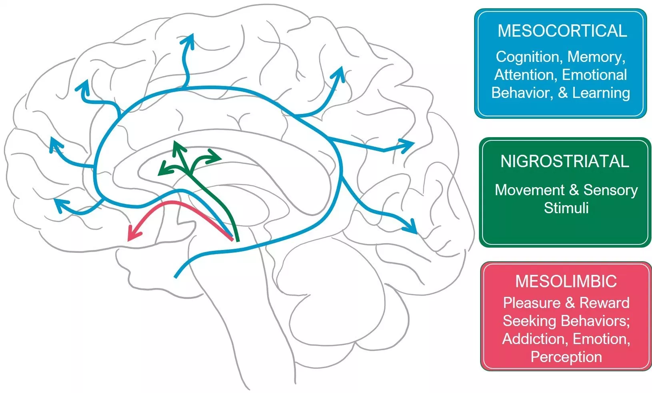 Because of these changes many parts of the brain and the nervous system as a whole become affected, which is why the effects of withdrawal are both mental and physical. Symptoms of withdrawal can be read more in Samhsa’s packet about withdrawal.

It’s the severe emotional and physical negative effect that drives the person with addiction to continue seeking out the drug in order to avoid the negative effects of withdrawal, further reinforcing the compulsive behaviors to seek out addictive substances.

Effects from changes in brain chemical levels and the unique effects of addictive substances, set the third stage for preoccupation/anticipation. The user craves substances and can relapse even after a period of abstinence. Addictive substances have a powerful effect on the brain, where they can change the response to our brain circuitry as drugs become associated with it. This is known as conditioned reinforcement, where the high in the brain a drug user gets from using becomes associated with certain behaviors, people, and places that led to them getting the high.⁶

This association alters the brain’s decision-making area, and overrides healthy decision-making processes. A specific idea in this stage is known as “triggers.”  When a person is exposed to an environment, person or other behavior that was associated with using, the brain’s executive function area can override normal, healthy decisions in order to seek out the drug again to achieve the high.⁷

These conditioned reinforcements only strengthens every time the user engages in drug use, and it becomes more difficult to stop themselves from using the drug again do to this change in the brain. This starts the cycle over again because a person then engages in drug use, starting the binge/intoxication phase, then experiences withdrawals, then craves drugs to achieve the high again. These cycles feed into each other and makes it seem impossible to get out of the vicious cycle of addiction.

Why does this matter?

With a better understanding of the science behind addiction, we can begin the process of understanding addiction and how it affects people. This helps us find, develop, and understand new and current treatment options, and better help afflicted populations receive treatment. Addiction is a complex disease, and to help those afflicted, we must be equipped with a strong knowledge base of what it is we are up against.

The next steps after understanding the disease is to know how to treat it. Here are a few helpful resources for treatment: