“JUST THE FACTS” is a series focused on substance use and mental health written especially for young adults and their parents. It’s easy to understand and judgment-free, giving young adults just the facts they need to help them make informed choices. 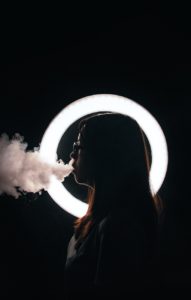 I just like the taste, so what’s the issue?

You’re not alone.  Last year, a major survey of 42-thousand students from nearly 400 public and private schools found young adults say they vape for the flavor, to experiment, for social reasons, or to feel good. However, from 2018-2019, the number of 12th graders saying they vape because they are “hooked” more than doubled to 8.1%, up from 3.6%.  So that means while vaping is easy to start, it’s not as easy to stop.

ICYMI:  If you had a particular love of mango or mint, last year the FDA announced a new enforcement policy to prohibit the sale of most flavored e-cigarette products.  This new partial ban probably includes your favorites – it affects sales of vape pods flavored with fruit or mint flavors.

How does vaping work?

E-cigarettes are electronic devices that heat liquid flavors and chemicals (e-juice). They produce an aerosol (a mix of small chemical particles that you inhale) heating a liquid that generally contains nicotine.

And yes, the word aerosol is correct!  The term “vaping” came about because everyone thought e-cigarettes just emitted vapor.  Fact: vaping produces aerosol, not actual vapor.

It’s not just nicotine that goes into e-cigarettes. For starters: heavy metals like lead, other particles, and carcinogens, Typical e-cigarette cartridges, known as “daps” or “pods,” make it hard to know exactly what is inside.

Synthetic drugs, such as Flakka, K2 or Spice, and various types of legal marijuana are ALSO  used with an e-cigarette. But if you buy on the black market, there’s another issue. Some black market distributors have substituted cheap and illegal synthetic marijuana for natural CBD in vapes.  While you may think it’s easier to buy black market products, it’s also a much bigger risk in terms of your health.

One example is the 2019 outbreak of vaping-related illnesses, sickening more than 2,800 people and killing at least 68.  Federal officials found that most people who died from vaping-related injuries used products containing THC, an ingredient in marijuana. It appears that black market operators used vitamin E acetate to cut THC oil to increase profits. Vitamin E acetate usually isn’t a problem as a vitamin supplement or when used on your skin — but new research suggests that when vitamin E acetate is inhaled, it may interfere with normal lung functioning.

Is it better for me than tobacco?

Not really, because we know far less about vaping than we do about tobacco. It’s often unclear what chemicals make up the vapor, but there’s also very little known about how it will affect your health over the long term.

You’ve probably known for a long time that cigarettes cause disease and even death. While they don’t use dried tobacco leaves, most e-cigarettes contain nicotine — the same addictive substance found in regular cigarettes and other tobacco products. However, some brands like Juul have an even higher level of nicotine. The CDC reports that according to the manufacturer, a single JUUL pod contains as much nicotine as a pack of 20 regular cigarettes.  And keep in mind whatever you buy may not actually list the true nicotine content – it could be more or less.

But isn’t it better for me if I’m trying to quit smoking?

Nope. E-cigarettes are not currently approved by the FDA as an aid to quit smoking, Companies may market vaping that way, but that’s intended as a way to sell their product. At one time, experts thought it would be a great way for adults to stop smoking. This video explains why that’s not the case for young adults.

What’s interesting is it’s actually the reverse issue.  Most young adults who vape never smoked before — but studies show that those who do are actually more likely to go on to smoke regular cigarettes.

So what if I do decide to stop vaping? Is it hard?

Quitting is hard — but everyone reacts differently when they quit.  In fact, your own reaction to quitting will depend on what you vape and how long you’ve been vaping. No two vaping products are the same, so it’s not possible to know how you will react to quitting.

Ask for help. If you have been vaping for a while, it may be difficult to just simply stop. If you have a healthcare provider you like, you can start there.  There are online resources (see below), if you’d like more social support, skill-building, or text reminders.

Oh, and Save the Planet While You’re At It.

Your vapes, e-cigarettes, refills, and cartridges should be treated as hazardous waste.  In fact, two “vape” components—the cartridge and the lithium-ion battery—require hazardous waste removal or drop it off at a local hazardous waste collection. (Check your local town or county website for locations.) Always remove the device’s battery before dropping it off to prevent unintentional burns, fires, and explosions.